From Overcapacity to One

Since February, I've had six kids in the house.  A number I never imagine I would have, since local policy states that five is the limit, and that includes biological children under 18 years of age.  The exception was made because I already had my son and one foster child when they needed placement for four siblings...and I was the only place in the county who could (or would) take them.  I didn't want them to have to switch schools, so took the plunge. 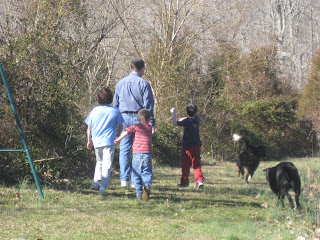 It was a busy few months, but now they are heading home.  The boy (Goofy) I had since January went home last week, to his dad, on a trial basis.  This means that the court retains custody for a predetermined period of time (usually six months) to see if the parent can remain appropriate for that child.  Before moving him, I was asked if I would be willing to take him back should the need arise.  I have been asked that several times before, but so far the parents have managed well enough.  I'm glad to have other children in his school so I can hear how he is doing, and so far the reports have been good.

Three more went home to their dad today.  This was a different situation from what I've seen before - parents were divorcing and had been separated when the kids were removed from the mother.  Dad found out and worked hard to get them back, through the CPS office.  Before family court was held to determine whether the kids would go to him or stay in care, divorce court was held (last week, same day that Goofy was removed).  That judge awarded him sole custody of his three children, but it took several more days for the order to be signed.  So, I packed them all up, sent the stuff to dad's during their weekend visitation, and hoped that word would come soon.  I got the call today, so off they went!

I still have their half-sister, and she isn't happy about it.  Daisy has turned 10 while in my care, and has gone from believing that her dad never loved her and didn't want anything to do with her (lies from her mother) to knowing that he does love her and want her...and getting weekend visitation with him!  Its a great change, and she is looking forward to it.  However, she is short-sighted and can only see that her siblings are where they want to be and she is not.  Family court was supposed to have been this week, but has been postponed, so she does have a legitimate reason to be upset.  I do hope it is only delayed a week, not a month or two, but you never can tell.

I am planning on taking a break of a few weeks after Daisy leaves in order to travel a bit and enjoy my own family without the extra noise-makers around :)  I must say, tonight has been awfully quiet!
Posted by Unknown