We recently had three foster children come and stay with us for exactly one week.  It was the most unusual circumstance that I've seen so far, as the kids didn't seem to have been in any danger at all, but thankfully the judge did the right thing and sent them right back home...or as fast as it could be done considering it was Labor Day weekend and no one worked Fri through Tuesday.

These were pretty good kids and we had no major issues.  They were all 3 older than my son, which is only the second time that's happened.  They are 9, 11 and 15 and were in 3 different schools.  Thankfully, school was only in session 3 of the 7 days they were with us!  We enjoyed the long weekend with them, getting to know them, playing games and other normal things.

The big excitement was that it was our county's fair week.  I had already taken DS, and worked my share at the Lions Club's booth when we got these three.  But they hadn't had the chance to go yet, so Friday night, we all went together.  It was a good time for all of them.

The other excitement was that we had water damage and the repair guys showed up on Labor Day to look at things and started tearing walls down on Tuesday.  Look at the mold in this picture!!  Ugh.

Thankfully, they got it killed off and the walls are rebuilt now, as well as some other improvements while we were tearing things up :)

Below is the 9 year old's efforts at the day of the week her last morning here, my correct spelling, then her good-bye that afternoon when we found out they were leaving.  Bye-bye! 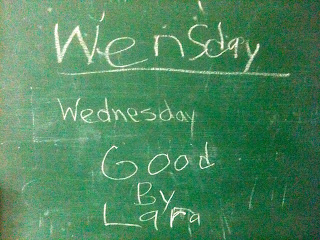