Our Second Week of Home Schooling

The novelty may have worn off.  This week didn't go quite as smoothly as last week, but I am not surprised.  Not only did our entire routine change when the foster children went home Monday night, but I've been unsuccessful in fighting off the cold that started last Friday.  It moved to my chest, ugh.  Then on Tuesday I got poison ivy for about the third time since spring.  Ah, well. 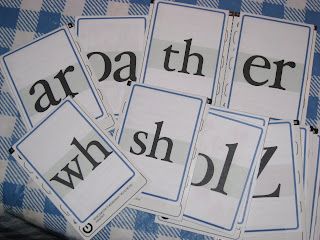 I also managed Art Class (free sample- through The Old Schoolhouse magazine promotion- from "See the Light: Drawing Children to Him") that I left out last week.  I do like Art Class, but it would be easier to watch if my computer didn't insist on saying that it can't properly play DVD's.  Sigh.  I also made sure we actually looked at Fragonard's self-portrait on Monday, then put it in a sheet protector and hung it on the wall next to the chalkboard (in the dining/school room). 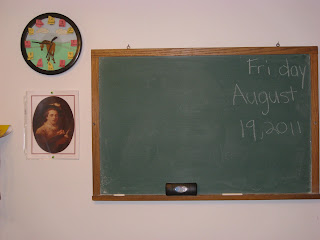 Finally, we toured the local food pantry and sat in on a meeting.  Food pantry is overcrowded and definitely needing a new building, like the Grayson Co. Alliance has been wanting for years now.  If you want to donate, let me know :)  I'm in charge of general fundraising for the Alliance (Like us on Facebook, too!).  End shameless plug.

Tuesday was also a good day.  We got through lessons pretty quickly, which included listening to a small portion of a Librivox recording of Midsummer Night's Dream (since my voice was about gone).  I also lengthened the time he spent on Funnix math.  Then we went outside!  First we did some dragonfly nature study and saw a duck on our pond (yay!  I was ecstatic!).  Our friend was here doing some farm work for us, as he often does, and he decided to work on clearing some land between our "waterfall" and sinkhole.  We have quite a canyon forming, so went exploring. 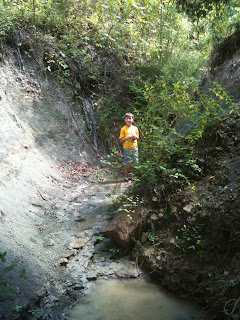 I taught Luke about shale, and how it and other rocks can be used as chalk.  He learned about water displacement by filling up a water hole with rocks.  He learned about erosion, and that some weird bugs live in the dark places where the roots grow.  After a while, I came back and fixed a picnic, and we enjoyed some food in the shade before he went back to "work" while I came inside and tried to get some rest.
Wednesday is when things started to go downhill, just a bit.  We had a deadline (lunch date to meet the new Extension Agent for family and consumer science) and got it all done with little whining. For Bible time, we did the second character study (Kids of Character), which was Attentiveness (last week was Obedience) and continued with scripture memorization.  We also read Mozart's biography and watched a couple of YouTube videos here.  After the luncheon, he went with Ma for sewing class.  He didn't want me there this time, but he learned the back-stitch and how to sew on buttons.
Thursday and Friday were full of stubbornness.  I lengthened the math lesson some more and it didn't go over well, so I will cut it back again and insert more reinforcement games next week.  I also added a new series of readers from Progressive Phonics (he's ready for their "advanced" books), which he resisted in the extreme. I will print this out for next week (as opposed to reading the PDF on the monitor) and take it slower, even though I know he can read at this level without any problem - IF he wanted to. Despite the attitude issues, we listened to our hymn and folk songs, Mozart's Requiem, and continued ocarina practice. We also went out and found a subject for a nature journals.  This spider is sad because Luke poked him with his  colored pencil. :)  The scribbley stuff is the web and the 2 red legs are antenna...which spiders don't have. 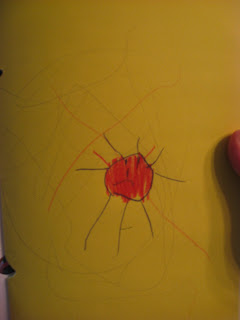 Until next time...
Posted by Unknown