Our Third Week of Homeschooling


I hope no one was waiting with baited breath for our third week's report, but if so, I'm sorry its late :)  We had such a wonderful weekend with (rare) perfect weather that I didn't stay inside very much!  We had family time at the creek, family reunion, and a church potluck at the lake.  Sorry to all of you involved in earthquakes and hurricanes recently, but all that wind pushed the pretty weather our way.

Our schedule this week was hectic.  I had personal appointments as well as volunteer commitments, so school didn't happen first thing in the morning until Thursday and Friday.  But it did happen every day, and that's the beauty of home school and freedom.

On Monday, we continued on with our routine of scripture memorization, Bible study and prayer, followed by math.  He is now on Funnix lesson 40, and getting through that whole lesson Monday was a challenge.  However, I'm pleased to say that I backed off and split lesson 41 between Tuesday and Wednesday, and got through with the daily whining that began last week had success!  He did lesson 42 on Thursday and 43 on Friday without any whining at all.

After math, we learned about the House Mouse through the Handbook of Nature Study, read a poem from A Child's Garden of Verses, used a free copywork page from here to go along with one of Aesop's Fables we read last Friday, then worked on phonics and reading.  Also, on Monday we read chapter 2 in Our Island Story, about the Romans attempting to invade Briton, listened to Mozart's Requiem and watched a Spanish video from Speekee.

On Tuesday, the same general format was followed.  We chose a different piece of copywork and a different poem.  Then we read about the 300 brave Spartans from Fifty Famous Stories Retold for history, finished reading a graphic novel called Knights from the library, and read a bit more of Midsummer's Night Dream from Tales from Shakespeare.  Each evening before bed, we read/listen to the original Peter Pan.

Wednesday and Thursday, we focused on geography instead of history.  We read Map Scales and Maps and Mapping, some more Fables, listened to Mozart's Symphony no. 41, Aiken Drum and For the Beauty of the Earth.  He also had sewing, and actually made a project from a kit!  He is going to enter it in the county fair next week, along with rock, feather and shell collections.  The project he will be most proud of, I think, will be the Lego creation.  Its all original, and he's worked on it for several days.  I'll post pics next time of those.

Friday, he finished up the week strong.  A second trip to the creek, house cleaning for dinner guests, an art lesson and we started to read Beauty and the Beast from the Blue Fairy Book.  It was longer than expected, so will read it for bedtime stories until done, than go back to Peter Pan. 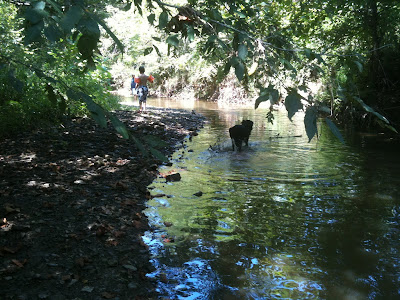 Nature study happened Thursday and Friday this week, but he didn't draw in the journal.  What he did do, though, was rediscover a love of the creek.  He swam, watched minnows, saw new bugs, named the "islands", picked out snack spots, and threw rocks to his heart's content. 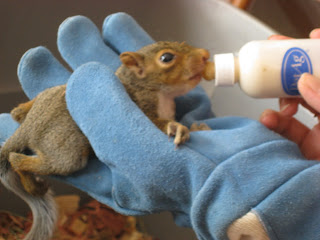 Friday afternoon, our neighbor brought over two baby squirrels they rescued!  Her significant other cuts down trees and saw their nest and brought it home!  I'd never seen a squirrel so small and up close before. 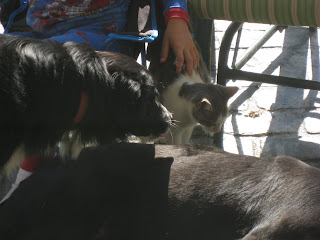 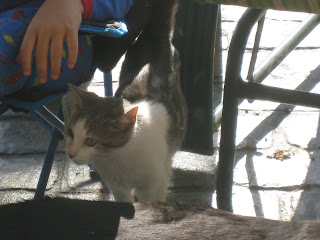 Friday evening, we came home with a new kitty named Kady.  She puts up with the dogs pretty well.
Posted by Unknown