Our Fourth Week of Homeschooling

I think Week 4 was probably about as normal a week as we'll ever have in this household, so I just tried to enjoy it. :)  Who needs normal anyway - that's boring!

The beginning of the week was beautiful - both in his cooperation and the cooler weather (below 90).  Mid-week, the summer heat came back full force, and today (Saturday) there is a heat advisory in effect.  Luckily, his attitude, while it did rear its ugly head, did not bite us like it did in past weeks.

Sunday we had a family reunion (more time at the creek!) and a time at the lake (and baptism) with our church family which was lots of fun. Luke had his first taste of volleyball and a lot of time on the playground with the other children.
I decided we need to get more organized about physical education, and it was high time the boy had his own working bike (we had rusty yard sale ones but he never showed interest in learning).  So Monday we went to the local bike shop and found a shiny blue bike and helmet to fit (alas, twas not blue).  He was very excited and we went straight to the park, shot this picture and gave it a shot.  He isn't ready for me to let go yet, but I don't think it will take long. 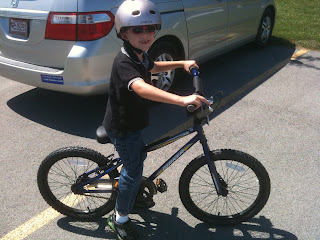 For school, our character study was Kindness.  We read about the woodchuck (groundhog), while remembering the one that lived in our garden a couple years ago.  He found a dead crane fly and started an insect collection.  We read a poem, did copywork, and worked on Progressive Phonics Advanced Book 2 and some words from week 25 on freereading.net.  We did some Spanish (Salsa video), then read two Aesop's Fables.  And of course, there was math.  We also finished Beauty and the Beast from Lang's Blue Fairy book.  Disney's Beauty and the Beast is one of my favorite movies, and after reading this original story, I think they did a decent job of it.  Better than Peter Pan, my husband thinks.  Peter Pan the movie leaves out too much of the death and mayhem!

Tuesday we read about Joseph's dream in Genesis 37, followed by Funnix math lesson 45.  We read Ch. 2 in the Burgess Bird Book, listened to the bird calls and looked at different photographs of them (sparrow and wren).  Another poem, then copywork, phonics, Spanish and Shakespeare.  I had forgotten to do artist study on Monday, so we looked at the Farmer's Children by Fragonard, and read a couple of stories from Fifty Favorite Stories Retold and he attempted narration of those, as we do with every story.  He doesn't like to narrate (or "tell it back"), but we're working on it!

We took Luke's fair projects by and entered them, then practiced the bike riding some more.  We found a fantastic HUGE moth, called a polyphemus moth.  He looked so fat he couldn't' fly but maybe he was sick.   I wasn't sure, so we left him at the park under a tree.  I need to start carrying "kill jars" around in the van to take advantage of our random discoveries. 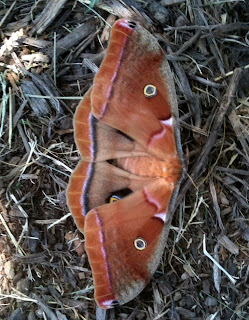 Wednesday we read about the boy Jesus going to the temple from Luke 2 (along with scripture memorization and prayer, as always), followed by Funnix lesson 46.  Poem, copywork, phonics and flashcards.  Sewing this week was cancelled due to the fair and my MIL's obligations there (judging quilts and clothing, basically being in charge of the Lion's Club concession booth), so we did some extra reading - finished Soccer from the library, and started Cinderella early, in case it was long like Beauty and the Beast.  We also did extra science - "What is a scientist?" from Lesson Pathways.  We talked about the different types of scientists, how we all can be scientists and played some great games that LP had linked- BBC Science Clips and Dragonfly TV.   We listened to Mozart's Symphony #25 and took some library books back before practicing the bike again.  I got my hair chopped off and donated to Locks of Love.  After my handbell rehearsal, we played Ticket to Ride as a family and had a lot of fun.  DS beat us both!! 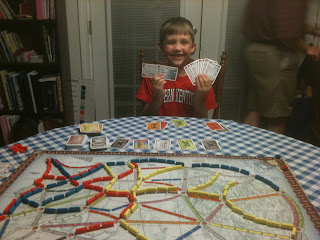 Thursday was when it really got hot, so we stayed inside (for the most part) until time for the fair.  Today we read Psalm 23 and added it to the scripture memory box, did Funnix lesson 47 and got to read Moses the Kitten from James Herriot's Treasury for Children.  I was really looking forward to this book, as I read all of his other books when I was in high school and loved them!  DS enjoyed it as well.  We moved on to the third phonics book and did a word find puzzle, which is starting to come easier to him, and listened to our folk song and hymn.  Then we enjoyed the air-conditioning and watched the hummingbirds through our picture window during our Ticket to Ride rematch.  I won.. :)  At the fair, he had a blast...and I got sweaty with sore feet!

There was no public school on Friday - I think because of the Co. Fair or something.  I didn't tell DS that, and we did school as usual, LOL.  We watched our DVD Bible story, which happened to be the Psalm of David this week- interesting since had just finished our fourth Thursday reading Psalm 23.  He particularly enjoyed the song that went with it.  After math, poem, copywork, phonics and Spanish, we finished Cinderella.  We played checkers, drew in our nature notebooks and rested up before heading back to the fairgrounds, this time to work.  I helped in the Lion's Club booth, serving up pizza, hot dogs, and burgers.  It was actually sort of fun!  DS helped put together popcorn boxes, then went to help his Pa and uncle at the fast-pitch baseball booth.

I plan on posting something weekly, but unless I change something from our usual schedule, I will be leaving out the minutia as it is getting repetitive now that we've settled into a routine.  I'm looking forward to the cooler weather that AccuWeather has promised me!
Posted by Unknown