Our Sixth Week of Homeschooling

As expected, it was a bit of a crazy week.  There was one day when DS said, "This is the craziest day of my life!" upon getting into the van yet again. 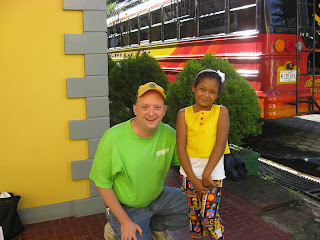 My husband is back from his mission trip to Nicaragua and had a good time.  Many people came to know Christ, and he learned how to work in a kitchen, understand a bit more Spanish, and help the vets handle the animals (mostly horses and cows).  I'll see if he will write a guest post for us soon! 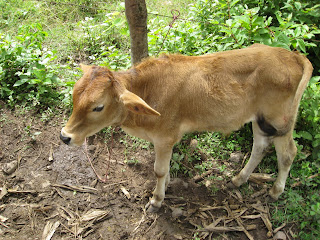 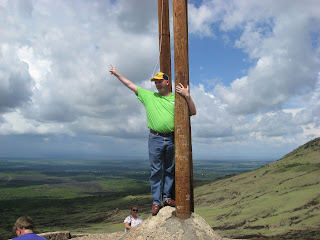 On Monday, I went to TSC and merchandised their Montana Silver Smith jewelery case, as I do ever 6 weeks for Lawrence Merchandising.  I picked DS up from Ma's house afterwards, and then did school, went to all 3 local parks in search of worthy playmates, then to Cloverbuds (4-H for 5-8 year olds).

Tuesday, we carpooled to Elizabethtown for a United Way meeting, during which he behaved beautifully.  I was assigned five locations in our county to present the annual campaign.  This does not come naturally to me, and I'm nervous about standing in front of strangers!  I made first contact with the locations and even presented the G.C. Alliance at one of the schools already (Wednesday afternoon).

Wednesday was another meeting for me, during which DS went to "work" with his uncle at Gamestation, collating dice sets for GameScience.  He enjoys that for about an hour, then plays computer games until I come get him.  We did school, sewing and dinner with the grandparents.

I decided to start teaching some music lessons, now that other things are becoming more and more routine.  Using musictheory.net, we spent just a few minutes going through the first lesson, which covered what is a staff, and the clefs.  The lessons are animated, short, and great for any beginner!  I plan on doing two new lessons a week, plus a review, and having him practice his ocarina at least twice a week.  Unfortunately, we haven't accomplished that in a few weeks now, mostly because I forgot to write it in my lesson plans, which means it never crossed my mind!

On Thursday, he enjoyed homeschool book discussion at the library, during which they did a couple of ocean related crafts to go along with The Magic School Bus ocean book.  He also had soccer practice and Lego club, and tried the bike again.  I pinched a nerve in my back that morning, so it was a long day for me :( 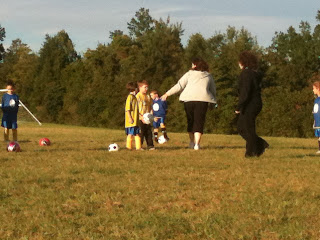 Friday morning, we went straight to the chiropractor to find some relief, then played at the park for almost 2 hours.  He was absolutely bursting with energy all day!  We got home, did Bible study, then he swung on the tire swing.  Back inside for another subject or two, then back out to run laps.  We eventually got everything done, then a friend came over and played for a while.

Saturday, I went back to the chiropractor and was feeling better - those muscles that had tensed up to help me stay half-hunched to avoid the nerve pain were still sort, but the pinch was gone.  So, we hauled chairs to the soccer field and I watched him play 2 games on the larger fields (he moved up an age bracket this fall).  He is more of a defensive than offensive player, but no matter what happens, he has a grand time running around!  Go Twisters! :)
After Heroes at the library, in which he donned mask and cape over his soccer uniform and had more fun, I helped him ride his bike one more time before taking him to Ma's house for the evening as requested.  I cleaned like a mad woman to get rid of the cat dander before hubby got home so his allergies wouldn't attack him.  Remember the new kitty that we named Kady?  Well, I took her in to be spayed, and she was a he!  So his name is now Jengo Fett...you know, the bounty hunter from Star Wars?  Here's hoping he's a good mouse hunter, too!