Pinterest is as inspiring as it is addicting!  You can find me here.

I joined because of the sheer number of my Facebook friends who were inviting me (peer pressure! LOL), and at first, I totally didn't get the big deal.  At all.  But every once in a while, I would go back and look again, and eventually I figured it out.  I'm really not usually slow to catch on, but this images-only was confusing to me :)

Anyway,  I have been loving the great (and cheap or free) ideas I've seen and have put several into action, such as the cereal-box trashcan for the mini-van.  I even added my own twist by storing the roll of garbage bags inside the canister. 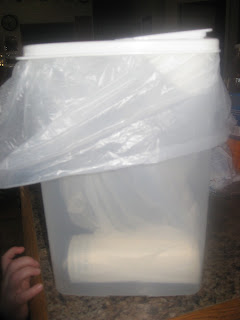 As I mentioned before, I am trying to get healthier in 2012 and that includes to take more baby-steps in getting the remainder of the chemicals out of the house.  So first - baby wipes!  I ran out today, and knew my Melaleuca Wellness Guide had a recipe...in fact, it has 3!  I sorta mixed them up into my own concoction, but it seems to work and smells really fresh.
First, I took a roll of paper towels and cut it in half.  This was by far the hardest part!  I didn't realize how tough the cardboard in the middle would be to hack through.  Next step was to pull the cardboard tube out - had to use the knife for that, too. 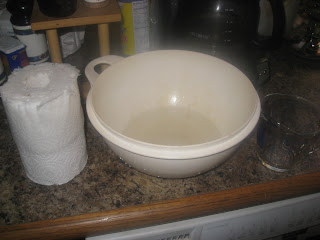 I took a large bowl and mixed the solution, including 2 1/2 cups warm water, a capful of Sol-u-Mel, a capful of Renew Bath Oil, and a spash of Tough & Tender,  and stirred it well.  Then I simply put the cut end of the paper towels into the solution and let it sit.  In 20 minutes or less, it soaked all the way to the top, and there was still liquid left over (I think because of the variance in the size of paper towel rolls, and the fact that I used 3/4 of one).  I squeezed the excess out gently and placed into the wipe box, but decided to go ahead and pull the  wipes apart, since they of course wouldn't nicely pull out one by one in that sort of container. 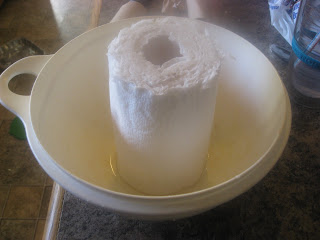 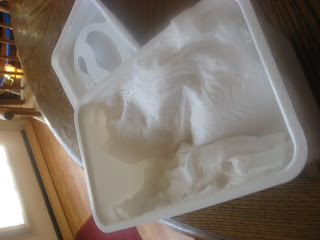 So, I used the leftover liquid, added a bit to it and used the other half of the paper towels to make a second batch.  And I was stumped as to what to do with it, since the direction recommended reusing a store bought handi-wipe container like what I have in the van (but it wasn't empty yet).  I remembered the cereal box containers, and knew I had another one, so I got it out.  It worked perfectly!  Yes, its larger than needed, but the paper towels could stand upright and be pulled from the center and ripped off as needed. 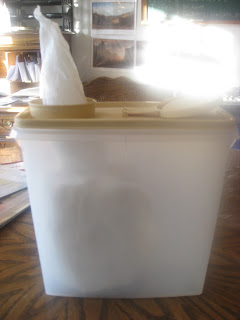 So there you have it!  A healthy and somewhat Pinterest inspired project.
Posted by Unknown